Posted by Urbfash Team Blogger on March 19, 2012
As part of the new Swatch Art & Fashion Collection, iconic Swiss watch and jewellery maker Swatch has collaborated with the acclaimed Japanese artist, Hideaki Kawashima, whose highly stylised images of women are both enigmatic and tender. 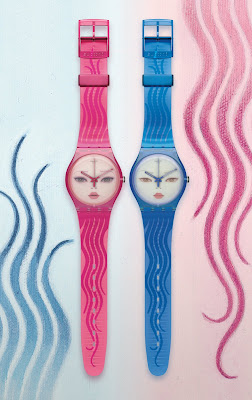 Hideaki Kawashima has proposed two distinctive designs for the Swatch Art & Fashion Collection. Each of these depicts a female face - with large, mysterious eyes and the most delicate of mouths - in keeping with the otherworldly yet inviting style of painting for which the artist is famed. Despite the apparent similarity of these two designs, each one is defined by its own specific color and further differentiated by subtle details that reveal themselves upon closer inspection.

Hideaki Kawashima was born in Aichi, Japan, in 1969. Working with acrylic paint, and often using a delicate palette of pale or even slightly translucent colors, he creates images focused on the female face and form, drawing inspiration from both spiritual and everyday sources. Despite the sense of control and precision found within Kawashima's paintings, he usually starts to construct the images directly upon canvas without using any preliminary sketches. The artist has admitted in the past that he prefers, if possible, to not give interviews about his work but instead simply present it and allow it to speak for itself. Since the early part of the 21st century, Kawashima has exhibited his paintings extensively at various prestigious galleries throughout Japan and beyond.

Hideaki Kawashima explains his design inspirations:
“When I designed these two wrist watches, I envisaged them having the character of a strange creature entwining around one's arm, just like someone's loving pet. Let's say these are your 'Little Mister and Little Miss'! I do hope you will like them.”
Hideaki Kawashima swatch