Posted by Urbfash Team Blogger on December 05, 2013
Singer Usher has lost a huge amount of weight. According to reports, he was determined to make weight and drop from 180 pounds to Leonard’s usual fighting weight of 146 pounds.
In newly-released photos from the set of “Hands of Stone,” which is currently filming in Panama, the R&B singer is shown with a mini fro and a noticeably slimmer physique.

“What he did as a boxer is no different from what I do as a dancer…I train like an athlete every day, believe it or not,” the 35-year said in the November issue of Men’s Health. “My commitment to this character demands that I not only physically get ready, but also become him. The hair, the personality, the manner he conducts himself in—all that.”

“He had such incredible discipline and he was flashy and classy at the same time,” Usher told Billboard. “I want to be as passionate and dedicated in preparing for this role as he was every time he stepped into the ring.”
Usher showed off his hard work and six pack with this Instagram post on Friday: “Flexin Friday in Panama. URIV,” he wrote. 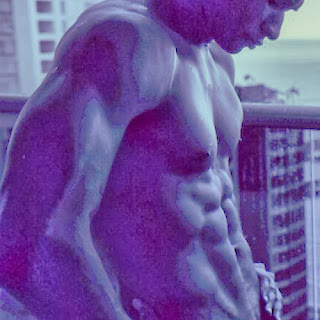 So what do you think of Usher's slimmed down self? You like?
Hands of Stone lost weight six pack Sugar Ray Leonard Usher Usher Raymond weight loss